To be considered for a Burke Scholarship, an applicant must have completed a minimum of two full golf seasons of work at a member club of the RIGA.

We are supported by contributions from clubs, members and various organizations, and individuals who believe in the value of education and our mission.

The Burke Fund is a 501(c)(3) Charity dedicated to assisting students with financial assistance, who have worked at least two years at a golf club, to reach their academic goals.

The Burke Fund, through its scholarship program encourages individuals to succeed in personal work ethic, academic achievement and contributions to their schools and to their communities. Four year scholarships are offered to college-bound students who have worked in the golf operations, course maintenance operations or in the clubhouse directly serving golfers. The Fund is committed to keeping pace with the increasing costs of college education by meeting a greater portions of the student’s unmet college financial need.

The Burke Fund is an equal opportunity scholarship program for students, working at golf courses. It does not discriminate of the basis of sex, race, age, religion or ethnic background.

History of the Burke Fund

John Burke attended Georgetown University on a basketball scholarship in 1936. His first year at Georgetown he played on the freshman team and briefly played basketball his sophomore year but soon realized that golf was his sport. When he switched from basketball to golf – he won the 1938 National Intercollegiate Championship (NCAA) at Oakmont Country Club, finished in the semifinals of the Western Amateur, and ended his college career with the 1940 Metropolitan Amateur Championship.

After graduating in 1940, Burke went on to work for the Anaconda Copper Mining Company in the management training program. Unfortunately, his work requirements prevented him from accepting an invitation to the 1941 Masters. In the fall of 1941, Burke was drafted and sent to Officer Candidate School for the U.S. Army and shortly thereafter was sent overseas for the invasion of North Africa.

Three years later, as a tribute to John Burke and all Rhode Islanders who served in World War II, members of the Rhode Island Golf Association established the John P. Burke Memorial Fund to help students reach their academic goals. John Burke was also posthumously inducted into the Georgetown Athletic Hall of Fame, at its inception in 1953, for golf. 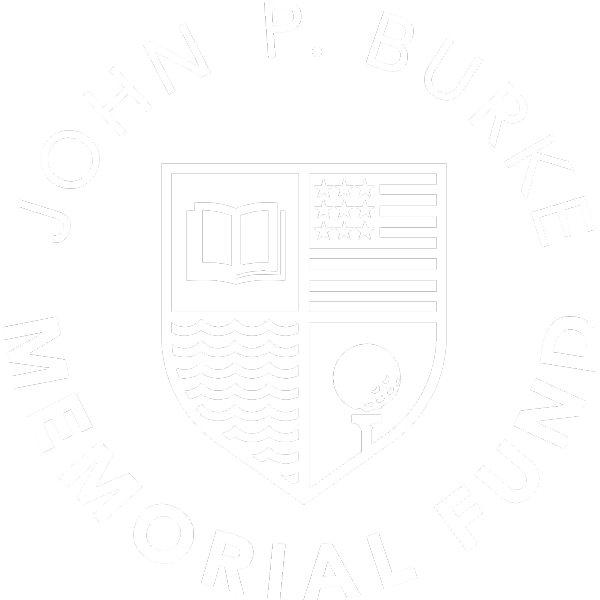 Our Mission
History
Board of Directors
News & Events
Contact

Who We Are
Scholarships
Support
Scholars & Alumni
News & Events
Donate